A minor scandal unfolding in the Swedish election highlights a way to influence news narratives: Google allows you to set headlines for news articles in search results by paying for adwords placements of legitimate articles.

This is being used by political operatives in Sweden to make it appear that news stories have headlines that the political parties themselves write.

You can place an adwords ad for a news article, linking to a legitimate news outlet, and then set the ad title to anything you like. The end result is an ad prominently featuring the official news outlets domain name, but with a title that you have set. It looks like this: 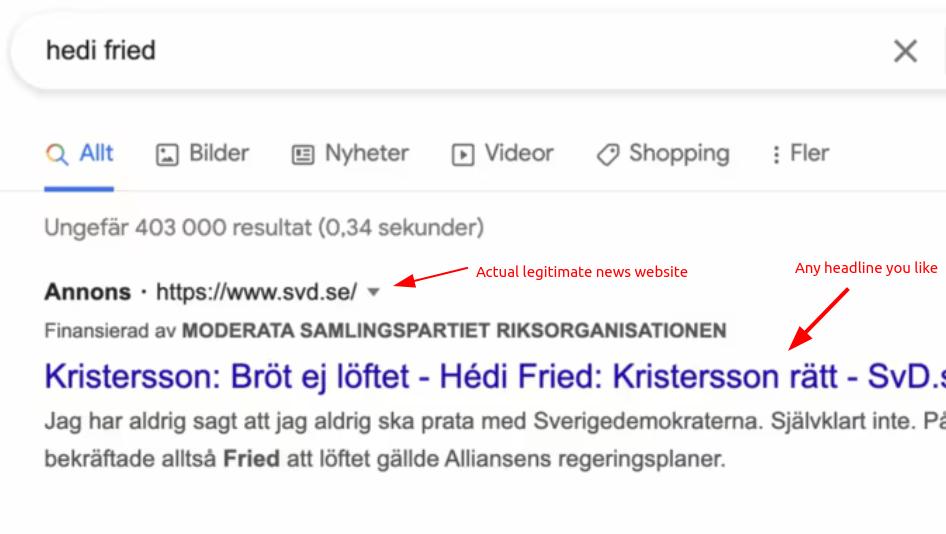 If you read Swedish or don’t mind google translating, an editorial on the situation written by the newspaper that had its headline altered can be found here.

I don’t want to write a long post on this, I primarily want to spread awareness that this is a thing being used to manipulate cursory googlers’ view of the world. However, some details might be helpful to understand how this was leveraged.

The story is something like: Ulf Kristersson is the head of a major centre-right political party in Sweden, the “Moderates”. In 2018 Ulf made, according to news articles at the time, a promise to a Holocaust survivor named Hédi Fried that he would not collaborate with an ascendant far-right party, the Swedish Democrats.

A year later Ulf changed position. In the current election he is running to form a joint government with the far-right group.

In 2019 when the change-of-foot was made public, Hédi Fried was interviewed about her dissapointment about the broken promise.

In 2022, the story saw a significant update, with an article in the major Swedish news outlet Svenska Dagbladed, “SvD”. In it, Hédi Fried confirms an account from Ulf that his original promise had been more narrow, and had technically not been broken.

The headline set by SvD editors for the article in search results was “Ulf Kristersson denies breaking promise to Hédi Fried”.

And so, to the most recent part of the scandal: If you searched for “Hédi Fried” on Google the other day, you’d find an adwords placement for this most recent SvD article. The ad prominently features the SvD domain, but it has the following title instead of the one SvD set: “Kristersson: I didn’t break the promise. Hédi Fried: Kristersson is right”.

Notably the ad has a label saying it is “financed by the Moderate party”, but nothing about the fact that the headline is not written by SvD.

And that’s it! I thought it’d be useful to share that this is a technique being used in the wild. Someone googling this story may have searched for “Hédi Fried”, saw what they thought was a headline from a legitimate news outlet, and had that influence their view of the facts.